Sprott put out an interesting note today about silver. I’d like to offer my own somewhat jaded take on things to balance out their very absolutist views on silver.

Sprott mentions the gold silver ratio and maintains that it will go down even more as silver outperforms gold. I mentioned this a little while ago (Yes, I’m Still Avoiding Silver’s Seductive Allure) and showed a chart of the silver gold ratio.

In a nutshell, Sprott believes that the “fiat money experiment” has failed and that in response both gold and silver are being treated by investors more and more like currency. More than gold, silver benefits from a two major sources of demand: as both a precious and industrial metal. Sprott hints that because of the fundamental supply and demand forces at play, silver will catch up to its long forgotten equilibrium with gold at a ratio of 10-15. At the current gold price, that projects a price of $94-150 for silver.

First I have to caution that Sprott is not a disinterested observer but a firm that benefits very much from the commodity boom and specifically from the precious metals bull market. They have been able to ride the commodity boom higher in the medium to long term. Even so, you have to be careful to look at not just what they say but also what they do. The timing of Sprott’s IPO is a good example of this.

One specific way that Sprott has a keen interest to see silver do well is their Sprott Physical Silver Trust (PSLV) – it also trades in the Canadian market (PHS.U). The fund has been trading for about less than 6 months. Maybe I’m jaded but whenever Wall Street firms trot out new products like this, I wonder how much of that is motivated by their convictions and how much by their penchant to “feed quacking ducks”.

Speaking of the Sprott Physical Silver Trust, let’s take a closer look . While it is called a ‘trust’ it does not trade at (or near) its NAV like the SPY or the QQQ but instead very much like a closed-end fund. In fact, for most of its young life, PSLV has traded at either a small or very large premium to its NAV.

Today it closed 22.88% above its NAV. Clearly there is irrational exuberance in the air when investors are willing to pay a fifth more than they should to buy silver.

Here’s a chart of the historical premium levels in the Sprott Physical Silver Trust (the blue arrow shows where we are today): 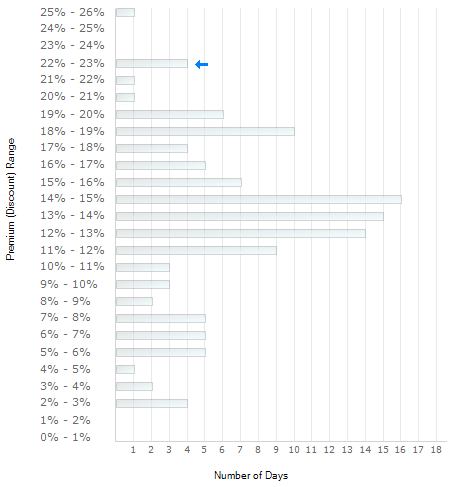 Obviously this is an outlier event, even for an investment product that has spent most of its life trading at a premium. There is no good reason for premium to cluster around 14-15%. But even if that is ‘normal’ for the Sprott Physical Silver Trust, that we are now seeing 20%+ premium tells us about the extreme bullish sentiment out there right now. This is not the only sentiment gauge for silver which is telling us this, in fact pretty much every gauge of sentiment is saying the same thing. Yesterday I mentioned the DSI for silver at an eye-popping 95%.

I hope that has allowed for a more nuanced take on Sprott’s report (below). Even if I were to join the fiat-hating silver-loving hoardes, I would bide my time and try to pick a good entry point. Not jump in with both feet in a bullish frenzy, which is basically what investors seem to be doing right now.

You know silver’s doing well when the commentators start giving it the ‘gold’ treatment. Silver’s recent rise has been so spectacular that it’s caught many investors off guard. It’s natural to be sceptical when you don’t know the fundamentals driving strong performance, and many pundits and commentators have been quick to downplay it as a result – much like they do towards gold when it enjoys a run. Silver is also an awkward metal for them to categorize. Is it a commodity, a monetary metal, or both? And which side is driving demand? If it’s industrial demand, that’s ok, because that’s bullish. But if it’s investment demand for silver as ‘money’, well then that’s sort of bearish, isn’t it? The fact remains that most commentators have failed to grasp the monetary shifts that silver is signaling today, and in doing so they’ve failed to appreciate just how high it could actually go.

The financial media’s failure to grasp the benefits of precious metals ownership continues to perplex us, and it’s not just the commentators who are prone to perpetual disbelief. The sell side analysts are equally as irresolute. According to Bloomberg, the ‘expert’ consensus silver price forecast for 2011 is $29.50, representing a 31% discount from the current spot price. This same group of analysts also predicts prices will decline another 25% in 2012 and a further 9% in 2013 to $20 an ounce. When you consider that the silver price has appreciated by over 21% annually over the past 10 years, these forecasts suggest a very dramatic change in the long-term trend. Will this reversal come true? Probably not. These were the same analysts who predicted that spot silver prices would average $18.65 this year – so they’ve missed the mark by over 100% thus far.

We don’t mean to bash the silver analyst community, and there are several whom we highly respect, but it is important for silver investors to appreciate that these price forecasts are being plugged into financial models that dictate equity valuations. These models are used by traders, bankers, analysts, and portfolio managers to derive valuations for silver stocks and create asset allocations for portfolios. To anyone questioning current silver equity valuations, we would ask: what price assumptions are you using? Of course we as allocators of capital are thankful for this phenomenon, as it allows us to buy our favourite silver stocks on the cheap, knowing full well that the herd will be following behind in due course as those backward-looking forecasts get ratcheted higher.

How can we be so confident that the price of silver will continue on its upward trajectory? Our thesis is premised on the most rudimentary of economic principles – supply and demand.

One of the key indicators that we’ve been monitoring is the gold/silver ratio. Much has been written about the ratio of late, and we won’t go into great detail on the subject, other than to note that the last time money was synonymous with defined amounts of gold and silver, the ratio was set at 16-to-one. In fact, for most of the past millennium, one ounce of gold would have been convertible to somewhere between 10 and 16 ounces of silver – an amount roughly in line with the relative occurrence of each mineral within the earth’s crust. For the better part of the past century, due to the world’s abandonment of bimetallism and then the gold standard, the gold/silver ratio has fluctuated widely, twice reaching lows near the 15-to-one mark and a high of 100-to-one back in the early 1990’s. The most recent high reached in the latter part of 2009 was nearly 80-to-one. Since then the ratio has been tumbling to where it stands now at 35-to-one – which reflects the incredible outperformance of silver over that time period. In our opinion, this ratio will continue to move lower, driven by nothing more than basic supply/demand fundamentals.

The US Mint, which is the world’s largest silver and gold coin manufacturer, recently reported that it had sold 13 million ounces of silver coins and 370 thousand ounces of gold coins on a year-to-date basis. This means that the US Mint is now selling roughly equal amounts of silver and gold in dollars so far this year. Furthermore, bullion dealers like Sprott Money and GoldMoney have confirmed with us that they are now selling more silver than gold in dollar terms. For additional confirmation of this investment trend, just look at the flows for the two largest gold and silver ETFs. Investors have withdrawn approximately $3 billion from the GLD so far this year while the SLV has seen net inflows of $370 million over the same period. Dollar for dollar, investors are allocating as much if not more money to silver than to gold. And why shouldn’t they? Silver is much more of a “precious” metal than the current ratio of 35-to-one would suggest.

Interestingly, this 9-to-one ratio is very similar to the ratio of available in-situ silver and gold reserves. The U.S. Geological Survey estimates that there are current in-situ reserves of approximately 16.4 billion ounces of silver versus 1.6 billion ounces for gold, or about a 10-to-one ratio (Source: “Mineral Commodity Summaries 2011.” US Geological Survey (2011). Pg. 66-67, 146-147).

Now, it’s true that another potential source of supply is the very silver that investors already own – and at the right silver price these inventories of silver and gold bullion may be sold into the market to supplement any supply shortfalls. As we’ve noted previously, however, due to decades of underinvestment, the amount of silver bullion inventories are actually extremely small, even compared to those of gold (see Sprott’s November 2010 “The Double-Barreled Silver Issue”). Recent estimates suggest that reported silver bullion inventories stand at roughly 1.2 billion ounces versus 2.2 billion ounces of gold bullion, or roughly a 0.5-to-one ratio (Source: Sprott Physical Silver Trust Prospectus). To put that amount in perspective, consider that at present there is only $52 billion worth of silver bullion/coins and over $3.3 trillion worth of gold in inventory which could potentially be recirculated into the market. Converting this to a ratio, you get a one-to-63 ratio of silver to gold inventories. So how is silver still priced at 35-to-one?!

All indications lead us to believe that there is now roughly an equal amount of investment flowing into silver and gold on a dollar-for-dollar basis. And although the price ratio of silver to gold has fallen substantially since the highs of 2009, our analysis strongly suggests that this ratio must move lower to restore a fundamental balance between supply and demand. Only time will tell how much lower it will go, but we would not be surprised to see it hit single digits before settling into a more sustainable equilibrium.

What the so-called silver ‘experts’ neglect to account for in their models and projections is that the fiat money experiment has failed. And in this context, we believe the Market has assigned world reserve currency status to gold – not USD, not EUR, and not JPY. In our opinion, gold’s continued appreciation vis-à-vis every currency is assured because the great flight from fiat has only just begun. Like gold, silver also has a long monetary history, and as such, investors are now also buying silver as protection from the ravages of fiat currency debasement. Yet, when compared to gold, it is silver that offers the most attractive value proposition by virtue of the gross mispricing of its scarcity, which, we might add, has existed for many years. Thus, in our opinion, as this new bimetallic standard takes root, silver investors will continue to be justly rewarded with marked outperformance. We truly believe that this is the investment opportunity of a lifetime, and increasingly so, others are taking heed. What is clear to us is that with equal investment dollars now flowing into silver and gold, the current 35-to-one ratio is unsustainable and has only one direction to go: lower.

This entry was posted in Uncategorized. Bookmark the permalink.